We return to my poor analysis of frames from the Legend of Korra, this time focusing on some selected from Kuvira’s Gambit, the third to last episode of the show. The first image places us in the formed ranks of Kuvira’s men standing at attention in the same square of Zhaofu where the Great Uniter had displayed Suyin and her sons as her prisoners and demanded the surrender of the city’s populace.  Here the use of perspective has the lines of the ranks drawing our eyes front and center to the podium where Kuvira is announcing the final step of their war.  The horizontal line of the raised terrace correct our line of vision and the square shape of the building seals our focus on Kuvira.  As if it needed more, the design of the building above her head also points straight to her.  It’s a neat and tidy frame. 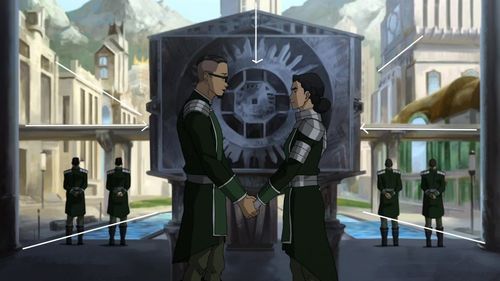 The love that barely spoke its name. This is definitely a cool frame as our two characters are grounded in the foreground by the clock, which separates them from Zhaofu behind them, yet, the perspective of the cityscape draws your eyes to the center of the frame where the two lovebirds hold hands.  Their hands fall within about the dead center of the frame and then we have the cue of the clock.  Time is running out on their romance (and the show) or one could interpret it to say their love is timeless (except when it gets in the way of crushing the Avatar as the last obstacle to victory).  As an aside, this is a flattering view of both characters, erasing the harsh expressions and attitudes we have become accustom to throughout the season.  Baatar, Jr., even looks a bit goofy, caught up in his puppy love. Zhu Li is the center of attention, fresh from her attempted sabotage of Kuvira’s spirit cannon and about to inform everyone that the attack is coming sooner than expected.  The focus on Zhu Li comes from a number of sources, be it the coffee table with its back right corner pointing at her and the lines of the table’s top running toward that corner, or from the invisible lines of sight from everyone waiting for Zhu Li to speak.  Zhu Li’s place in the frame is also emphasized by her placement in front of the seal behind President Raiko’s desk, with its circular lines ending right at her head and its generally bright coloring forming a pillar down to Zhu Li.  Speaking of bright color, Zhu Li is drawn darker than her surroundings, which happen to be the brightest spot in the room. 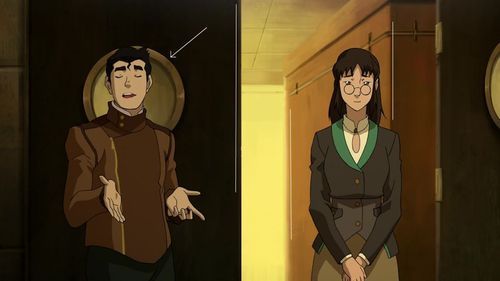 In this scene, Bolin is in the process of announcing Zhu Li’s return to Varrick (off screen at the moment), and it’s a fascinating frame.  The screen is divided down the center with the dark color of the door which Bolin stands in front of and then the open door which Zhu Li stands in.  Bolin is the one talking, so our attention is drawn to him with his head placed in front of the only bright spot in the door, a window (kind of like a halo).  One could argue that as much as the window reveals what’s on the other side of the door, so Bolin is revealing to Varrick what has happened. However, as he’s talking about Zhu Li, she’s not cast into the background, but in a neutral area, brighter than Bolin’s space, but not quite as heavily indicated as Bolin to be the center of our attention. Her own stance is quite passive with her hands folded together in front of her as she waits her chance to speak. After years of devoted service to Varrick, Zhu Li finally decides that now is the time to tell her former boss her true feelings for him.  Note, given the importance of what Zhu Li has to tell Varrick, her feelings ABOUT Varrick, we have him in the frame in the foreground to the right.  His back is to us, he’s out of focus, but he’s intended to be there as the visual cue to what Zhu Li is speaking about.  Likewise, Zhu Li is speaking from the heart and has even raised her hand to it as she tells Varrick she’s in love with him.  It’s possible that this scene, by its animation and framing, could lend itself to someone figuring out the subject of the conversation without knowing anything else about the characters or show. If there’s any question as to who one’s eyes are to focus on, just check out the lines drawing them to Zhu Li.  Lastly, a small touch I loved, was Zhu Li’s hair style.  For the first time, she isn’t wearing it up, she’s literally let her hair down to speak the truth to Varrick. 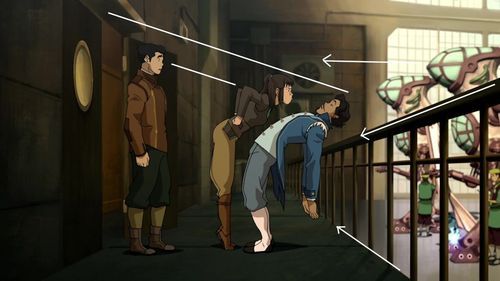 Right, so Varrick responded entirely inappropriately to Zhu Li’s confession of the soul and she is giving him the riot act concerning her future position in his life (at his side or nowhere else).  The perspective lines of the railing draw our eyes to the center of the frame and the incredibly backward leaning Industrialist.  You also have the left facing humming bird mechs directing our attention to the characters.  Fascinatingly, Bolin, Zhu-Li and Varrick are all positioned in a manner to create a triangle pointing to the center of the frame.  As an aside, Zhu Li must have the balance of a professional ballerina by leaning so far forward on the tips of her toes. Just a simple cut away scene during Prince Wu’s reassuring speech on going to the bathroom by himself of folks listening in around Republic City.  The focal point is actually the woman, but the secondary is the radio with everyone’s attention, sight lines and body posture oriented toward it.  The perspective of the street buildings guide us to the woman (who’s own posture points us down), along with the blue “V” of the sky formed by the outline of the city behind her.  Additionally, the skyscrapers immediately behind her create a broad vertical line pulling one’s gaze downward. The arrival of the United Republic forces under the command of General Iroh at night.  We don’t get many views of Republic City from this perspective, facing out toward the ocean, so in a way, that’s unique.  As for composition, there are a number of things interesting about the frame.  First, the city itself acts as an arrow pointing toward the horizon with its brilliant lights against the darkness of the sky.  Second, the fleet arrives on the focal point with a neat mirroring effect caused by the dark shapes of the airships directly above the battleships, as if one is the reflection of the other. In this scene, where President Raiko, Lin Beifong and Tenzin are waiting news in Air Temple Island, their positioning in the chamber draws everyone’s attention to Tenzin with the perspective created by the columns and floor.  Tenzin is centered directly in the middle of the room. 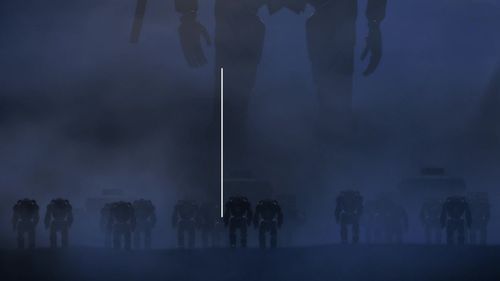 The first appearance of the Colossus as it emerges out of the fog of the night (or one might say, fog of war) before the forward guard post of the United Republic.  It’s a dark frame, but the darkest grouping of regular mechs is in the middle of the frame and focus your eye on the leg of the giant mech behind them.  The leg, itself, is almost centered in the frame.  Visually, we are given an immediate scale to the size of the Colossus compared to the mechs and tanks we’ve seen previously. 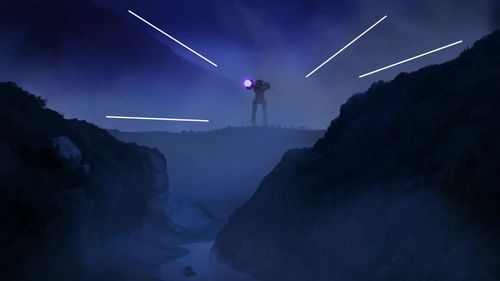 In this scene, it’s about to vaporize the poor guards.  It’s actually quite small, in part to allow the beam to take up the screen as it blasts forward, but it’s our focal point.  The natural lines of the land and horizon draw our eyes to it, likewise, its silhouette against the brightest area of the frame also draws our attention. Korra and Company view the Colossus for the first time, perfectly framed in a pass between two mountains in the middle ground of the image and against a mountain directly behind it.  Additionally, our heroes’ gaze along with their out of focus placement in the foreground also guides one’s attention to the giant beast. 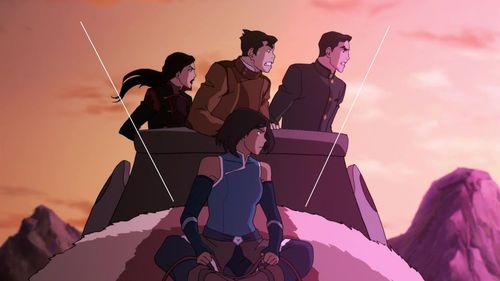 From the purple light highlighting everyone, the spirit cannon has just fired or is about to fire.  Not good for our champions.  None the less, they are framed perfectly, forming an inverted triangle that focuses our attention on Korra at the head of the sky bison (yeah, I went there), who is centered in the screen.  The anticipation of the light is increased by everyone’s attention focused intently to the right of the screen, facing the light. The Airbenders are lined up and ready for Kuvira’s attack!  The placement of the Airbenders with perspective in mind, draws our gaze from Kai down to Tenzin, Bumi and to the focal point of the frame (whoever that random dude is).  The Airbenders are also framed by the red brick building behind them to keep our attention focused on them and not exploring the background.  The difference is that random dude who’s push forward highlights their anticipation toward the impending attack.  As a nice touch, you can see more Airbenders on another rooftop to the right. Kuvira in her position of power in the command center of the Colossus. There isn’t a lot to say that isn’t obvious with her center placement, all lines directing your attention to her.  As noted previously, a popular perspective for Kuvira is one looking up toward her.  It’s an empowering view of the Great Uniter. What did I just say about upward perspective and power?  This is showcased again when Korra goes into the Avatar state and lifts Baatar, Jr., off the ground above her.  Yes, yes, naturally he would be above her, but from this perspective, he’s shown looking down and without much concern.  Baatar is in control in this moment because he knows Korra is not a killer and her threat is hollow.  It’s a great visual cue to Baatar’s reaction to Korra’s violence.  Our eyes are drawn to the centered fiancé of the Great Uniter by the lines in the ceiling and Korra’s own arm that hefts him upward. 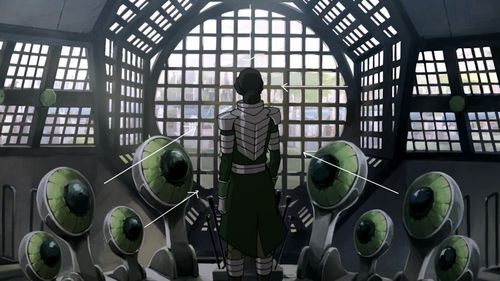 This is a cool image of Kuvira facing Republic City from the Colossus.  Her attention is the city and centered by the multiple lines of the cockpit and the invisible lines of sight from her controls which look like a number of unblinking eyes.  It’s a pensive moment whenever you have anyone with their back to the viewer gazing out a window (just think of the famous John F. Kennedy painting of him leaning forward against his desk, gazing out the windows of the Oval Office).  This not a moment of action, but thought, as Kuvira calculates Baatar’s life against the city before her, the final end goal of everything she has sought to accomplish over the last three years.  All eyes are on her at the moment as she makes the decision to kill her fiancée. Decision made.  Our heroes have realized their gamble has failed miserably and are running for their lives.  The frame is composed with Korra centered as the focus of our attention and everyone else fanning out behind her to help form an inverted triangle to help draw our attention to the Avatar.  Likewise, the windows behind her also draw the lines that guide our eyes back to her.  The fact that windows are not parallel to the ground, but off kilter helps drive home the sense that things are going wrong for our heroes.