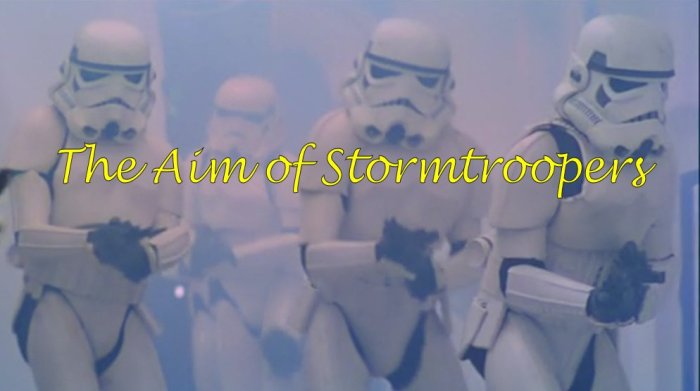 The Galactic Empire for nearly two decades slowly ground the galaxy underneath its proverbial jackboot heel.  Lead by the sinister Emperor Palpatine and terrorized by Darth Vader, the Empire’s capital ships became symbols of oppression, used as recently as the last Rogue One trailer.  In short, there’s a lot about the Empire that intimidates and frightens, but over the course of the nearly forty years since the premiere of A New Hope the stormtrooper has become something of a mocked figure.

The humor directed at the white armor clad minions of the Empire most often boils down to a perceived inability to hit anything with their blasters.  This joke even appeared in Season Two of Rebels, wherein “Stealth Strike” we watched Captain Rex and Kanan Jarrus complain the stormtrooper helmets make it impossible to hit anything.  And perhaps, the ability of the lowly stormtrooper was undermined by a certain battle on a specific forest moon, where primitive Ewoks managed to serve up a bitter dish to the legions.  It didn’t start out that way, and arguably, the status of the stormtrooper resisted much if any diminishment across the original trilogy.

In the first film of that series, stormtroopers are the first human representatives of the Empire in A New Hope.   Their introduction arrived in an explosion of smoke, sparks, and fire, before the worried faces of the defenders of the Tantive IV.  The worry was real, as the stormtroopers who formed the boarding party, quickly left many of the friends and comrades dead on the deck of the ship.  The stormtroopers went on to make short order of the rebels on Princess Leia’s consular ship, and nor were they the last to fall to Imperial blasters.

On Tatooine, in search of the plans of the Death Star, the stormtroopers wiped out a sand crawler’s worth of jawas, and but for the sharp eye of Obi-Wan Kenobi, might have succeeded in framing their slaughter on the Sand People.  The same stormtroopers who tracked the path of the droids to the jawas, also followed the trail to the Lars farm stead with tragic results for Luke Skywalker.  Throughout the film, with the sole exception of our heroes, the stormtroopers repeatedly proved themselves capable of effective fighting and ruthless execution of the Empire’s will.  This didn’t change, either, in the sequel that followed.

A fan made computer game, based on the flight sim X-Wing, offered players the chance to pilot a snow speeder set during The Empire Strikes Back.  That game was appropriately called Hell Hoth No Fury.  The Battle of Hoth, due to the ineptitude of Admiral Ozzel, became a victorious land battle under the command of General Veers and one again, which was made possible by the ability of the stormtrooper in the form of the snowtrooper.  No few number of rebels were left to snowy graves in the aftermath of the hasty retreat.  Not until Return of the Jedi were stormtroopers tested against a questionable enemy, the Ewoks.

The Battle of Endor has been criticized for the presence of those furry pint sized forest pygmies and in particularly, their success, albeit limited, against Imperial troops.  Watchers of the battle are treated to storm troopers being hit on the head with large rocks, strangled by bolas which wrapped around their necks, and aerial attack from Ewok gliders above.  In this case, it’s best to remember two things.  First, the Ewoks had home court advantage.  Everything about the Ewoks offered one advantage after another, from size and appearance, to their own obvious knowledge of the terrain.  Second, the Ewoks didn’t win the battle, and were in full fledge retreat until Chewbacca captured an AT-ST and offered the rebels a new tactical advantage.  But the question arose in Jedi, as it did in every film before it, if the stormtroopers were so good, why didn’t they ever hit what they were shooting at?

Specifically, we refer to our heroes, Luke, Han, Leia, and Chewbacca.   All but Leia emerged unscathed after repeated encounters with the legions, and had a stormtrooper simply better aim aboard the Death Star, there wouldn’t have been a Tatooine bush pilot making an incredible shot at an exhaust port only a number of hours later.  The answer to this question is obvious, they are the heroes.  The protagonist(s) enjoy the storytelling equivalent of Teflon, with author directed destinies that hold their adventures will not end until the happy ending.  The stormtroopers could not any sooner hit any of the heroes than they might the viewer.  Thankfully, the fearsome reputation that George Lucas bestowed upon the Empire’s foot soldiers continued on under the banner of the First Order, who like the Empire’s stormtroopers, don’t hesitate to wipe out a village on Jakku (with one exception, of course!).

With large black insect-like eyes and a permanent frown, the stormtroopers who answered the call of Darth Vader and the Emperor did so with lethal ability and little regard for the lives or rights of those who stood in the way of performing their job.  Rogue One promises more opportunities to see stormtroopers in the field, doing what they love to do most, killing rebels.  How many will they miss? How many graves will they fill?  Until December, 2016, we can only ponder the aim of stormtroopers.

4 thoughts on “Riffing on Star Wars: #17 – The Aim of Stormtroopers”