Her name was Oola and she was a rebel.  You may remember her, green skin, tentacles hanging from the back of her head, and an outfit that left little to be imagined.  She danced in the court of Jabba the Hutt, but not by choice.  Oola was a slave, but died a person demanding her freedom.  Oola was a Twi’lek.  Presented as the Star Wars equivalent of the slave girls of Orion in Star Trek, green women who also performed seductive dances before those with questionable moral values, Oola was one of the two Twi’leks originally featured in Return of the Jedi.  The other, ironically enough, was Jabba the Hutt’s powerful majordomo, Bib Fortuna.  In a single scene, Twi’leks were represented in bondage and as high ranking official to one who had enslaved their race.  Since that introduction, Twi’leks have continued to play a major role in the stories of the Star Wars galaxy.

Natives of the planet Ryloth, Twi’leks join the Wookiees as a race enslaved in the time of the Empire and also as fierce warriors.  It’s their martial abilities which drew them into the stories of The Clone Wars, as well the prequel films (albeit in a significantly smaller role).  In The Clone Wars, the first season dedicates several episodes to the Twi’leks and to Ryloth, focusing on the native Twi’lek resistance to Separatist invasion.  These episodes introduced the Twi’lek freedom fighter, Cham Syndulla, as the battle savvy leader of a band of Twi’lek partisans.  It’s a life choice that will follow Syndulla for several decades, as he establishes the Free Ryloth Movement to fight the subsequent Imperial occupation of his home.  His efforts eventually find narrative form in Lords of the Sith, in which he launches an all out assault on a Star Destroyer carrying Darth Vader and Emperor Palpatine, with hopes to decapitate the head of the Galactic Empire snake.  Cham’s continuing fight also appears in Season Two of Rebels in the episode, “Homecoming.”

For fans of Rebels, the name Syndulla calls to mind the image of a freedom fighter, a hero and valiant Twi’lek.  However, in this case, a woman named Hera. In “Homecoming,” it’s established that Hera is the daughter of Cham, who carries his passion to fight the empire beyond the skies of Ryloth, but into the stars of the planet’s night skies.  Their reunion results in a clash of personalities and strategy, as both desire to pursue their ambitions when it comes to fighting the Empire.  Hera stands out as one of Rebels’ two strong female characters, alongside the Mandalorian Sabine Wren.  Over the two seasons of Rebels, Hera has presented herself as a leader, an ace pilot, and eventually, a commissioned officer in the growing rebel movement against the Galactic Empire.  Like her father, Hera Syndulla has also enjoyed an adventure between the pages of one of the debut novels of the current expanded universe, A New Dawn by John Jackson Miller.  That story introduces Hera early in her fight against the Empire and details how she came to know Kanan Jarrus.  While the level of her romantic attachment to Kanan flames the minds and imaginations of Rebels fans, Hera has never been contextualized on the show by her friendship and relationship to the Jedi.  Hera isn’t a Force user, but Twi’leks have numbered among the members of the Jedi Order.

While seen, but not all heard or named, The Clone Wars followed several Twi’lek members of the Jedi Order.  Among them was Aayla Secura, a Jedi Master, who’s death was featured in the emotionally painful montage of Jedi killed under Order 66 in Revenge of the Sith.  Seen in Attack of the Clones, Secura was granted a much more expansive role in The Clone Wars as a general over Clone Troopers and the main protagonist in a number of episodes.  Secura appears early in the show, sharing screen time with Anakin Skywalker’s apprentice, Ahsoka Tano.  Over the course of two episodes, Secura serves as a mentor to Tano, representing something of an ideal Jedi by reminding Tano of a Jedi’s need to avoid attachment (while Skywalker lingers on the point of possible death) and vocally affirming the peaceful and defensive aspects of the order.  Secura also represents something more than just a powerful and wise Jedi, she also represents a rebuff against the sexual objectification of female Twi’leks. 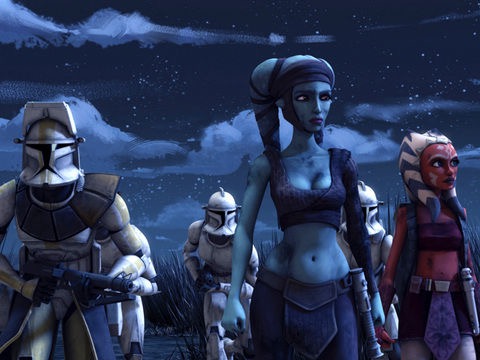 The objectification began with Oola.  The only female Twi’lek on film (until the Return of the Jedi Special Edition added a second), Oola was presented as a slave, complete with collar and chain, as well scantily dressed.  Oola does reject her station, paying for it with her life, but her time in that resistance occupies less than a minute of the movie.  Even the addition of another Twi’lek woman in the Special Edition as a barely covered backup singer fails to change the narrative being presented in Jabba’s palace.  Twi’lek women are dressed to arouse the eye, to be objectified.  On the other end of this spectrum, Hera in Rebels is dressed in refutation of her Return of the Jedi sisters, dressed in long sleeves, coveralls, and a flight suit most of the time.  In the middle, we find Secura.  Secura is the only Jedi to wear a crop top, cut low across the chest and exposing her midriff (Ahsoka wears something close initially, but as she grows older, her clothing becomes more conservative).  Chaste Jedi robe it isn’t, but the difference between Master Secura’s outfit and that of Oola’s, is that we know Secura chose to dress this way.  She has taken possession of her own body, presenting it as she desires, all the while being a strong and capable leader.  As a result, on the big and small screen, from Aayla to Hera, Twi’lek women have left behind the objectification that defined them in Return of the Jedi.

Season Three of Rebels returns this Saturday, September 24, and accordingly, so does Hera Syndulla, along with the rest of the crew of the Ghost.  Twi’leks didn’t appear in The Force Awakens, nor are any yet rumored to appear in Rogue One, but their absence from the cinematic universe is more than balanced by their overwhelming presence elsewhere in the Star Wars universe, from television screen to novels to comic books.  Beginning from the lowly role of dancing slave girl before Jabba the Hutt to becoming one of the main heroes and role models of the popular television series, Twi’leks have become an identifiable part of the franchise.